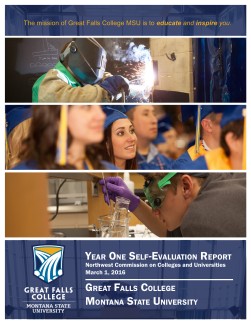 Prioritization The top priority of Great Falls College MSU is student success. As a part of this mission, the college strives to offer the most applicable academic programs so students succeed in their educational goals. In addition, the college endeavors to offer the most efficient and effective student support programs, which encompass everything from academic advising to facility maintenance. Over the past few years, the college has experienced a continued decrease in student enrollment, primarily due to the strong economy experienced in Montana. A strong economy, with low unemployment rates, is quite positive for the community; however, it presents potential students with many options that do not depend upon educational attainment. As a proactive response, Great Falls College MSU began a prioritization process in August 2015 to evaluate all its academic and administrative programs. This process was conducted by two separate volunteer task forces. Faculty evaluated academic programs, and classified and professional staff evaluated administrative programs. No Executive Team members served on either task force. Prioritization is designed to target resources for reallocation for future uses. The targeted financial goal of prioritization was set at a minimum of $250,000. Each task force used pre-set criteria for their evaluations. These criteria were based on Robert Dickeson’s Prioritizing Academic Programs and Services 1 and modified by a team of GFC MSU staff and faculty who had earlier attended an orientation by Dickeson on the process. From these evaluations, programs were placed into five quintiles. Following two campus-wide meetings to reveal the quintiles, they were given to the CEO/dean for final decisions on sustaining, reorganizing, enhancing, or eliminating programs. The CEO/dean also used current and projected economic and workforce studies, state office data and initiative plans, and community partner input in her decision-making. Decisions were announced February 2016. 1 Dickeson, Robert C. (2010). Prioritizing academic programs and services: Reallocating resources and achieving strategic balance. San Francisco: Jossey-Bass. Great Falls College Montana State University 19
edit